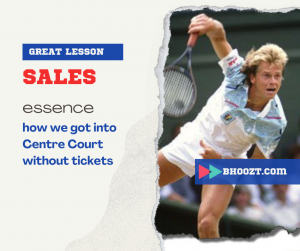 Problem: We queued outside Wimbledon from 4am to get tickets but missed out on centre court. My friend Thomas said ‘don’t worry, we’ll get into centre court.’

Thomas was the number 1 player of our university team and he would prove himself to be a great salesman later in life. On this particular day, I learnt why. It was the best lesson in sales I have received.

At the time, I was reluctant to pursue the conversation any further cause I had a bad feeling it would end in us getting arrested or kicked out. At lunch time, Thomas said let’s go to centre court. I obeyed like a little lamb destined to the slaughter house. Here’s what happened.

Solution: Thomas would watch everyone coming out of centre court and approached only couples. He used the same line over and over. It went like this. He said we had travelled very far to see Wimbledon (true) but we had missed out on centre court tickets (also true). He asked if they were done with their tickets and if so they would consider selling the tickets to us as it had been a dream of ours to watch a centre court match (also true). For good measure, he added that we would pay whatever they wanted, but we were poor students (again true).

The first five or six couples politely said ‘no’. The next couple handed over their tickets and didn’t accept payment. We saw Stefan Edberg against Miloslav Mecir (my favourite tennis player of all time).

Lesson: I asked Thomas why he didn’t give up after the first few rejections. His answer remains with me today, 30 years later. He said, ‘What’s the worst that could happen? They say no. So you ask the next person. All you need is one yes.’

Learning: True. Nobody punched us in our face. The rejection was not so bad after the third one. In fact it even became fun. A game. Wow, I wish I had learnt that in high school. Life would have been so much more fun – guaranteed.